I’m sure those of you who are parents already have an idea where I’m going with this. Perhaps you’ve shared these feelings a time or two. For the rest of you, I too had no idea how essential the family restroom would be. Before Mac, I’m not sure I even noticed them. I mean, I’m sure I’d seen them before, but never appreciated the genius and necessity, that is the family restroom. I certainly never thought I’d be so appreciative of one to think to write an “Ode.”

Ode: noun \ˈōd\ a poem in which a person expresses a strong feeling of love or respect for someone or something. This is the definition straight out of my Webster’s dictionary, well, the online dictionary because let’s be serious. Although this isn’t exactly a poem in the traditional sense, I will be expressing some love and certainly respect for something.

Target. That’s right, we were back at Target. Probably the third time in a week, but not even close to my record of 7 times in four days right before the holidays. (Don’t even ask). My wife and I had just spent 30-45 minutes shopping together for groceries, baby food, diapers and other essentials when she announced she wanted to look at the women’s shoes. “Sounds good, Mac and I will take the cart and go look at books,” I responded.

We never made it. About to turn the corner into the book aisle, I noticed Mac’s face turn progressively into various shades of dark reds and purples, coupled with a few grunts. He was filling his pants, no doubt about it. Under normal circumstances I would continue shopping and worry about it later, but there was a smell. Not unusual of course, but it was getting increasingly potent. I glanced down to see if his diaper was visibly full and that’s when I saw it. He had a small wet spot on his jeans that was growing down his right leg. It seemed to double in size every second I stared at it. Immediately I rushed the cart to the front of the store. I located the shoe department, and when I found my wife, I said, “watch him! I’m running to the car to grab the diaper bag!”

After rescuing the diaper bag from the car I raced back in to find my wife already by the restrooms. Knowing full well that this was a two person job, we opted not to play Rock Paper Scissors to determine who gets to change him. I asked if they had a family restroom, which they did, but of course it was occupied. While we waited we assessed damage. My wife had already removed his sock and shoe to reveal his messy diaper had made its way all the way down his leg out the bottom of his jeans onto his sock and into his shoe.

By the time the family restroom door opened, I was holding a plastic bag under his foot to prevent his stinky mess from reaching he ground! When we actually got into the restroom to clean him up, all we could do was laugh. It was almost as though he missed the diaper entirely and shot everything right down the pant leg. Did that really just happen? Did anyone see us? But it didn’t matter. We were safe now, inside the comfort of the family restroom. We could take our time, use as many wipes as needed, and break out the change of clothes. The entire time our little man giggled hysterically on the changing table.

I am so thankful for family restroom that day. This would have been miserable for so many reasons if one of us had to use the individual male or female restrooms. 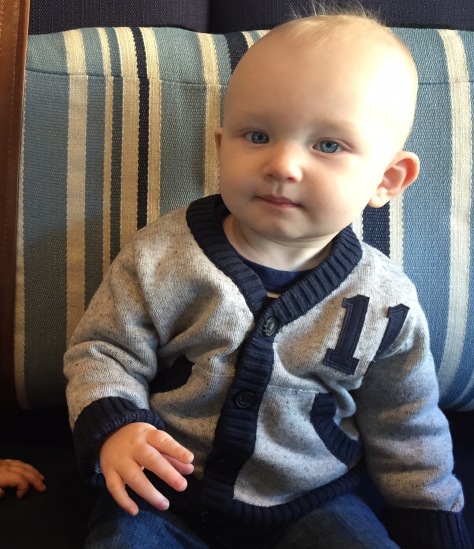 “I’m not so sure this story is doing me any favors with the ladies, Dad..” -Mac, unimpressed.

Author of Mac Daddy, a normal guy, but more importantly a husband and a new father